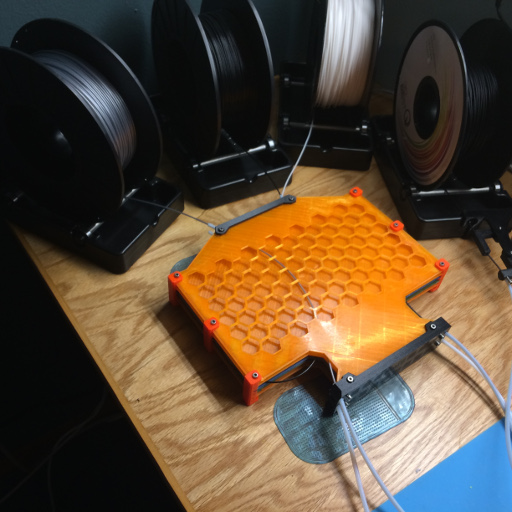 I am anxiously awaiting the Multiple Material 2S upgrades promised by Prusa.  During my wait I have printed the MK3S extruder and even ordered and received magnets (which are not needed – more on that later).

The week the plans for the filament buffer were update on GitHub I downloaded and printed them.  Big issue there (more later).

I have almost removed the MMU 2.0 from my MK3 several times.  The only reason it is still in place is that Prusa releases an update that addresses the issues I’ve observed so I would try again.

To their credit things improved and I learned tricks to salvage a print job baby sitting the printer through all of the changes.

Having my ‘regular’ colors loaded makes it quick and easy to select a filament and print. Checking that a print starts assures the filament worked and the print is well on its way.

Filament loading where there are two different issues.  ‘Not quite loading’ is the biggest, where the filament makes it past the filament sensor but does not catch in the extruder.    This causes a missing layer (or two).

And there is ‘the hard crunch’ where the filament is jammed into the extruder gears before they engage.  While this rarely causes the print to fail it is a harsh sound and undoubtedly potentially harmful to the equipment.

I calibrate my filaments with the MMU which helps a lot but doesn’t totally eliminate these issues.  The hard crunch is preferable to the missing layers but I had to tighten the bondtech gear on the motor once so I know it is hitting pretty hard. You really don’t want the filament pushing too far either.

Another issue is dealing with the retracted filament.  The spool holders provided don’t work on about 1/2 of my filaments. It introduces a coil in some filament but if the filament is brittle it will often snap when it pulled into a tight coil.   Other filaments just push back through the adapter to the reel and the loops fall over one of the sides of the reel.  The filament then tangles when pulled.

It takes constant attention to assure the filament made it all the way to the extruder gears because it takes immediate action to salvage a print if it doesn’t.  Every filament change you have to worry about broken or tangled filament . My experience with the MMU 2.0 unit is that it is only slightly better than manually changing the filaments.

With the announcement of the MK3S they made plans to update all MMU 2.0 owners  to the Multiple Material 2S.  This includes the MK3S update if you print your own extruder parts.  This means they are shipping a new filament sensor module along with some screws and nuts.

For MMU 2.0 owners there are two major changes to turn their unit into the Multiple Material 2S (MM2S).  The filament sensor module, which is the same as the MK3S.  This requires updating the extruder, which you would want to do anyway.

The big announcement in my opinion was…. drum roll please….  The filament buffer!

MK3S Extruder vs the MM2S Extruder

After printing the MK3S extruder parts I picked up some magnets and put together the extruder in anticipation of updating the printer.

News flash:  In the R4 extruder for MM2S the steel ball housing is replaced with a solid and the magnets have no purpose.  The MM2S  uses an arm extended from the filament door.  The only specialized part you need is a filament sensor module which you can order online if you don’t want to wait for the update from Prusa or you have a clone.

I downloaded the Filament Buffer files and ran into a big issue, for me at least. They provided a .DFX file of the buffer-plate but there is a issue with it that none of my software could get past.  I developed a FreeCAD macro to create a buffer-plate that works but there was another ‘big’ issue; the buffer-plate is 230mm x 260mm, which is too big to print with the MK3.

So I fired up the FLSun Cube which has a build volume of 260×260 mm.  Using the FLSun cube is a long story…

Having a ‘working model’ of the filament buffer in hand really helps.  I like the honeycomb barrier for the top layer but didn’t see it as a viable option for the inside layers after threading a filament.

I can now figure out an arrangement to get some desk space back.  The buffer works great!

So now I am waiting.  Prusa promised a shipment someday in the next few months, and China is already offering the sensor for sale.  Since I have a project printer I need an additional sensor so I’ve already ordered  one.  As soon as I have a sensor I will do the update!

April 12 – The clone arrived and I updated to MK3S / MMU 2S successfully!

I’ve even had a jam due to over sized (way out of tolerance) filament and had to tear down the print-head to fix it.  That gave me a chance to evaluate the R4 revision was designed to make hot end maintenance easier.  The R4 design is an improvement but to clear a complete jam like I was dealing with still required a bit of disassembly.  NOTE:  I didn’t check the sensor adjustment after reassembly.  On the tool change it was pumping filament through from the MMU and wouldn’t stop until I applied pressure to push in the lever to signal the filament had loaded successfully.  It left a huge blob of molten filament on the purge block.  I learned to always check the calibration of the sensor  after doing maintenance on the hot end.

I think the world of Joseph Prusa and fully support his efforts.  The MMU 2.0 almost worked so I am really looking forward to seeing how well the Multiple Material 2S performs.  I don’t expect perfection but I do expect to be able to succeed without baby sitting the printer.

Since I now have a fully functional MMU2S I can say with confidence that the update does address the issues I had been dealing with.  Great job Prusa!  I am now sold on Prusa’s MMU 2S solution and feel confident recommending it.

The last remaining issue was all clearing up the printer area.  I could only fit four trays behind the printer and needed a solution that ‘fit’.  Here is my solution!