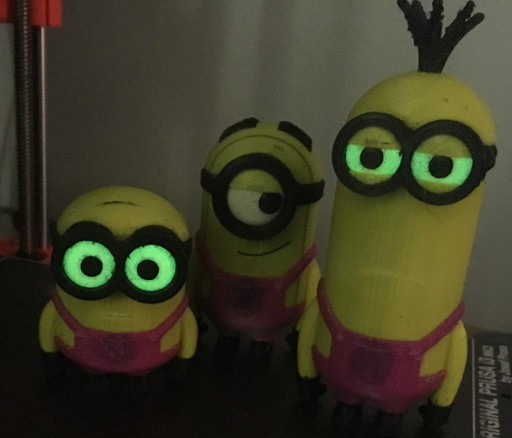 I started a multiple-material print in PETG in my previous post with 490 tool changes and an estimated print time of 26+ hours.

It finished with only three issues, all of which where recoverable. The actual print time was 28 hours.

Experience with the MMU2.0

The MMU2.0 unit was useful but not reliable enough to use. It failed far more often than it succeeded despite my vigilance.

The MMU2.0 was useful because it provides auto loading/unloading which streamlines setup. No more heating up a printer to change filaments before starting a job. A second benefit was starting a job without loading a filament. The convenience made it worthwhile and I was learning a lot from dealing with the failures.

When the MMU2S upgrade was announced I couldn’t wait for my shipment. Since I didn’t have room on the desk behind my printer for the Filament Buffer and five spool holders I went vertical with my wall mounted MMU2s Buffer Mount.

I was having loading issues so I design wall mounted bearing pegs to eliminate the drag introduced by the wall pegs. The spool holders had bearings so I used those.

The bearing pegs seemed to help but there there were still load failures. I noticed the failures happened when there was a long string on the end of the retracted filament. There is always some string but sometimes it is quite long. I noticed that failures seemed to occur when it was long so I started manually trimming the filament tip between uses.

After a couple of hours without a failure I took a break and while on break there was a load failure. So, I experimented to the end of the job trimming some of the time and just observing the rest. It only failed when I wasn’t trimming.

The MMU has a trimmer but from what I’ve seen it doesn’t actually trim anything. The problem seemed to be that the filament needed trimming so I looked for a better trimmer. Luckily marin_au determined that the single blade doesn’t cut it (pun intended) and designed a dual-blade enhancement that does cut it. Since installing the dual-blade trimmer my prints usually complete without any issues.

With all of the updates in place I was experience success for the first time. with great success and it was time for something more significant. Two minions at once. Drum roll please:

There were three times the printer required user attention.

There were three incidences in 28 hours of printing that required user attention. The print ran continuously almost 24 hours without an issue.

The MMU2s performs as advertised!!! 99.4% with recoverable issues is success. This is my second test print with minions (see Stuart One in the background). Printing one or two minions at a time the tool changes are the same so this makes two out of two successful test prints.

The dual-blade trimmer seems to have made a big difference. In my first test I spent a lot of time babysitting the printer and had about two dozen issues, some of which I barely recovered.