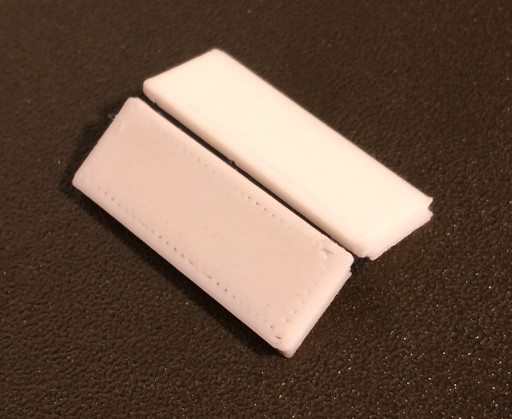 Multiple Materials should mean more than printing the same material in multiple colors. I would have done this a long time ago but once I installed the MMU2.0 upgrade it wasn’t possible to print TPU anymore. If it did successfully load it seriously jammed up on the retraction.

Unlike the MMU2.0 the MMU2s spins both the Extruder and the MMU until the filament is detected at the Extruder. I have my MMU2S working well so it was time to find out if that change enabled the MMU2s to handle TPU.

I wanted to see the MMU change filaments with TPU so I decided to see how well TPU and PETG bonded.

How strong is the bond between TPU and PETG? I has to be strong for a flexible hinge.

I have determined that PLA and PETG do not stick together. I thought I might be able to use PLA as support material for PETG but it didn’t work. The purge block was ratty from filament not sticking and print destroyed by filament that didn’t stick to the support.

Finally, does a TPU hinge work? Does it break with a lot of bending back and forth?

First challenge in designing this test was figuring out how to create a TPU hinge. I decided to put two small plates together with a flexible middle. Looking at the design I recognized a separation on one side might allow the material to act as a hinge.

Starting with the flexible center the TPU loaded, then the PETG, then the TPU again. Everything was looking good but on the purge the print stopped and acted like it had detected a broken filament, moving to the front and extruding some filament. This happened a couple of time while still on the purge block and then the PETG filament was loaded and the print continued.

The next filament change, back to TPU, there were several another interruption and I finally swapped the TPU filament for PETG to get the print to finish.

Analysis of the First Print

Despite the issues the first print proved:

The TPU bonds well to the PETG and is durable so the idea of mixing the two materials is valid. The MMU2S may start to print with TPU but seems prone to filament detection errors.

The conclusion from the first print was the concept is valid but the MMU2S didn’t print TPU reliably. I searched Thingiverse and found this Replacement IR sensor holder thanks to Hans Frimmel.

The first print revealed that a very small amount of TPU is all that is needed. I reduced the middle to 2mm wide three layers deep.

Things didn’t start so well. In my first test I had put the TPU on the #1 spool and the print started with the TPU. I had switch to spool #5 which and it started second. This turned out to be bad because it didn’t get a clean purge (it had a load failure) and it put down two layers that were sparse.

I restarted the print changing the TPU back to #1 so it started and printed a significant quantity before printing and got a perfect first layer. This time the MMU successfully changed filaments (only a few changes were needed) and the test print completed without issue.

TPU adds a new level of flex to standard prints. It bonds well to PETG and can be flexed over and over without cracking. Hinges, flaps, one way gears, joints, and so much more!

I am overjoyed with the results. Printing PETG and TPU is multiple material printing. I believe with another mod or two I will be able to rely on the TPU tool changes and have the confidence to use TPU where-ever it makes sense.